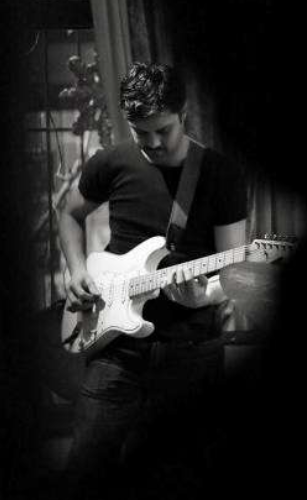 Born in Aigio-Greece (1978) and based in Athens, Sakis Tsinoukas studied classical guitar and piano since the age of 9. As a teenager he taught himself electric guitar and worked as a professional musician in genres ranging from blues and rock to Greek traditional and folk music. In 2005 he got accepted to the Codarts Conservatorium in Rotterdam (NL) where he graduated from the jazz department.

He has released two albums under his own quartet (“In Between” ANKH 2014 and “The Great Orange Tip” to be released) and two as a band member (“Dog Beat” by Dog Beat 2016 and “Prosac Youth” by Numea 2019). Having collaborated with most musicians of the Greek jazz scene, he is a member of avant garde composer’s Kyriakos Sfetsas Greek Fusion Orchestra, and guitar player of Blues Cargo the most popular blues band in Athens Greece.